Uzala – Tales of Blood and Fire (King of the Monsters Records) 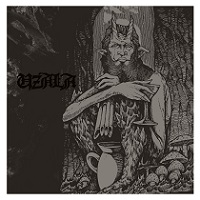 How slow can you go?  That seems to be a challenge that Boise’s Uzala is more than keen to rise to.  Slow in tempo and moreover, slow in feel – a prominent trait of their latest release, Tales of Blood and Fire, the band’s second full-length. Doom metal is the variety, and for what the doom umbrella encompasses, snail’s pace metal has a long-standing home.

Uzala, a four-piece band, present five tracks spanning 43 minutes of 70’s-esque occult doom in a subdued and spaced out manner.  The mood is dark, a little heavy, and has a jam-session flavor to the jangling bass lines and fuzzy psychedelic-tinged guitar work.  Simplistic riffs dominate the songwriting, never feeling far removed from the ubiquitous “devil’s triad” musical interval, and many of the main lines have the bass and guitars doing triple duty together.  No-frills drumming sets this poky pace, although one might forget that it’s there entirely.  Singer/guitarist Darcy Nutt’s cleanly sung vocals are a strong point for the band and are punctuated at times by her almost Middle Eastern sounding inflections. To this point, her vocals add a certain level of mystique to the music.

The album closes with “Tenement of the Lost,” and perhaps takes a page from the playbook of noise nerds Sunn O))).  It features six minutes (out of twelve) of droning feedback sounds before getting to the musical part of the song, a stripped-down little ditty that doesn’t reward the effort of making it through the first half.  Though a real slog from start to finish, for what this album is, it’s performed capably.  Dull as it may be, the silver lining leaves behind some pretty good album artwork – a paltry payback.  Tales of Blood and Fire is for doom fans only.