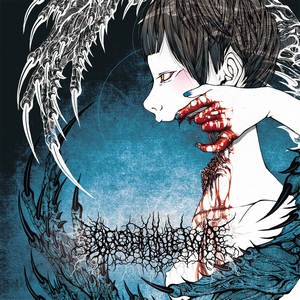 This one made its way to the top of the review deck based upon the artwork itself. Absolutely creepy and downright brutal, but there’s something breathtaking and fascinating about it. That blue color really rounds things out as well. But alas, this isn’t all about the art – this Japanese act delivers brutal, slamming death metal that, while you owe it to yourself to check out at least one, but just be too much to comprehend.

There’s much to like about Wriggling Chrysalis of Metaphysical Grudge. For a slam-based album, it’s entirely unpredictable. The riffing is crazed and technical, and frequently launches into directions that you will not expect, and there is even some eerie melodies that move into the picture and give an otherwise excessively brutal track some grounding. But some tracks put all that aside and just give you a pummeling. “Cerebral Infarction” might be the most bludgeoning track of the year so far. You may not remember it at the end, but you’ll know the rush of the frantic pacing and disgustingly heavy tone.

On the other hand, it might just be too much to take in. It’s fast in all the right ways, but the sense of any structure is shot. It’s clear that the band was going for a “mindfuck” vibe (again, look at the cover) so we’ll let that one slide. But the vocals themselves are just too upfront. When the low gutturals come in, it all but drowns out everything else, and the frequent pig squeal vocals just go too high into the register. And then there’s the biggest surprise: vocals so brutal, they’ve been replaced by bubbling noises (you really must check it out for yourself)!

Wriggling Chrysalis is impressive at points, but occasionally gets completely buried by the vocal component. With a proper leash on the vocal volume, this could be a real creepy masterpiece so there’s some high hopes for next time around. But if you are looking for an album to make your head explode – Urobilinemia are probably the right band for the job.