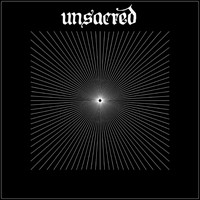 Some albums need to be taken at face value for their frenetic rush of adrenaline. There’s no need to hear subtlety or variation. Occasionally you need an album that is just going to relentlessly pound you into oblivion. Currently, your best option for this is the debut full-length from Virginia’s Unsacred.

While Unsacred might not be first to the block with their notion of fusing black metal with d-beat, punk, and crust, False Light is notably vicious. Utilizing that mid-tempo black metal stomp, there is never a moment where Unsacred isn’t punching you in the gut. Things occasionally push towards speedier moments (with full-on blast beats of course), but where the band really does shine is when they slow things down. There are some absolutely destructive riffs that Unsacred pull off when they decide to really churn things out (see “Sun”). Unfortunately, there are only a few moments like this on the album because they do pack a wallop. Moving on to the vocals, they are thoroughly acidic and rather high in the mix (at least for black metal) but add to the overall intensity of the album.

At 22-minutes, this one is a get in, get out release. Wisely avoiding a feeling of redundancy, False Light lingers just long enough to kick you in the teeth and run to the hills before you know what hit you. Though a bit one-dimensional in its execution, Unsacred are rather good at what they do. A tad more variation (or at least a bit more of that slow tempo madness) could springboard the band to new heights, but False Light works as a short discharge of menacing and raw energy.