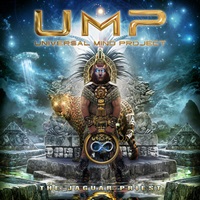 The collaborative international project platform exploded in conjunction with home studio and internet connectivity over the past decade (or slightly longer) – as the material can be done remotely and pieced together on one’s own time. Universal Mind Project is a modern progressive/ power metal outfit founded in 2012 by guitarist/composer Michael Alexander – gaining a co-writer in vocalist Elina Laivera. The main members also include Darkwater vocalist Henrik Båth, and Luca Turilli’s Rhapsody drummer Alex Landenburg – plus eight supplementary guests across the spectrum from acts like Symphony X, Pagan’s Mind, Epica, DGM, Andromeda, and Dream Theater past and present lineups.

Opener “Anthem for Freedom” wastes no time establishing their multi-faceted approach – modern while musically invigorating, including clean and growl parts vocally (Epica’s Mark Jansen providing the latter) plus a fluid, neo-classical keyboard run from Emanuele Casali. The follow up “Truth” is a robust up-tempo number, Elina’s angelic upper range melding brilliantly to the riffs and lightning quick lead sections. Breaking up the epic numbers for the fifth, eighth, and ninth tracks proves to be quite wise, as the first “Awakened by the Light (Universal Mind)” contains narrative and acoustic break passages that give the progressive nature of the 8:17 arrangement room to explore and breathe, crossing Symphony X / Evergrey lines for moodiness plus musicality. The title cut as the longest track has Michael serve up some heavier riffs, while the keyboards and drums juggle between time signature maneuvers and straight forward power parts in an adventurous, exhilarating aural odyssey.

Keys to survival in this power/progressive metal sub-genre include versatility and dynamic songwriting abilities – as often going too far in one direction when it comes to virtuosity or showmanship can lose those who need solid hooks and memorable choruses. Fortunately for all involved, The Jaguar Priest is successful in melding those necessary elements and a bit more (check out the magnificent Jan Yrlund cover art) – keeping Universal Mind Project on the fast track for wide range appeal and interest beyond the guest musicians who will also garner fringe promotional push to the record.