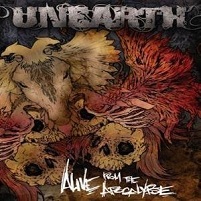 Not your run-of-the-mill DVD release, Alive From the Apocalypse is a two-disc set featuring a live set and a cool documentary that takes us from Unearth’s beginnings in the Massachusetts metalcore scene to where they are now – undisputed heavyweights of arguably the worst style of metal since Nu metal. Nevertheless, (and we’ll let that be the only negative aside towards the ‘core’) Alive From the Apocalypse is worthy viewing, especially the documentary portion, which we’ll get to first…

With commentary from a veritable ‘who’s-who’ in the American metal scene, the documentary portion is stocked with old, unseen footage of the band slugging it out in the late 90’s, honing their beatdown-infused brand of metal. ‘Tis cool to see the band’s now infamous stage antics in their early form and to get a feel for just how hard these fellas worked to get to where they are today.

From chats discussing the band’s crazed alcohol consumption (almost on a Pantera level…), to how they ‘coaxed’ singer Trevor Phipps into the joining by tricking him at a rehearsal, this is about as in-depth of a documentary as you’re going to get, something the likes of Maiden has already perfected and hopefully some other bands will employ as well. Videos for all of the band’s current Metal Blade run is tacked on for additional viewing.

The live portion is culled from a show in Pomona, CA, featuring current faves like “Giles,” “The Great Dividers” and perhaps the band’s best song, “Endless.” Stage antics are in full swing (and the crowd loves it), but it’s much, much cooler to see these cats live where their boundless energy overshadows their obvious hard-on for borrowed In Flames riffs and blatant beatdowns.

Very pro, very well-done, Alive From the Apocalypse is going to get a lot of attention from the kids and rightfully so – Unearth are at their arguable peak and can do whatever the fuck they want. Whether that pleases you or not is your call, but this DVD had yours truly coming back a few times just to witness the old times, realizing that while Unearth may never tickle one’s fancy, they sure are quality entertainment. 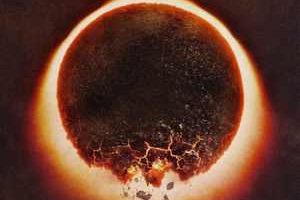