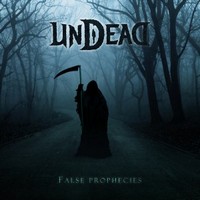 Usually, the bands that leave themselves shrouded in mystery belong to the black metal camp, but Undead’s anonymous hooded members clearly belong to the old school death metal faction. While it is refreshing to see another band try to divert attention away from themselves and focus that energy upon the music, the music itself of False Prophecies isn’t quite as refreshingly original.

If you missed the key words in the above paragraph, Undead take much of their influence from the old school masters Death, Obituary, and Massacre. Of the three (and yes, there’s more but you can get the point), Death comes across as the most blatant, with a number of the tracks making some definite homages to Leprosy. Some eerie melodies (see “Voices Within”) keep things interesting from time to time, as does the shift in emphasis to groove in a few of the tracks (see “Castrate Humanity”). But these fleeting moments don’t stop the album from being what it is: another entry into the old school death metal of the month club. Vocally, this doesn’t do much to maintain an individuality – seeming taking elements from Death and Obituary (again). But it works in a pinch and is done with some enthusiasm.

There’s nothing wrong with Undead’s music, it’s just a bit lacking in originality. It does pack a bit more wallop than some of the other similar bands making their way through this familiar territory, but in the end, it’s something you’ll grab a few times until the next band comes along. If they were to add some more mystery to the playing (as they do their identities), there’s some potential that could be developed into something great here.