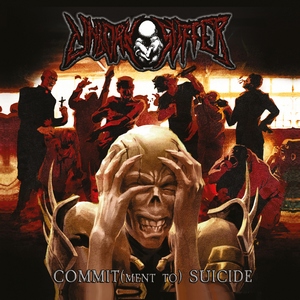 Things generally aren’t going to be moving in the right direction when the first name that pops up in one’s memory when hearing a band is that of Moritician (for this scribe at least). Sadly, that’s the case when it comes to Unborn Suffer, whose longstanding death grind combination (this is their sixth full-length to date since forming in 2001) is full of noise and blastbeats, but offers little in the realm of substance.

To get it out there first, Unborn Suffer is heavy. Their guitar sound comes down like a sledgehammer and it buzzes like there is no tomorrow. But as we all know, heaviness isn’t everything. The band fires off 27 ‘tracks’ in 36-minutes, and ‘tracks’ written as such since even after repeated listens, it still sounds like a big ball of noise and chaos. There’s a few moments here and there (for instance, a solo stands out on “Castrated Consciousness” or a few moments of playfulness on “Degradation of Evolution”), but there’s a whole lot of rumbling going on from beginning to end and almost nothing to really catch your ear and come back to it. With the massive guitar distortion, there’s not much to offer in terms of melody aside from the sheer weight of it, which means there’s not much to really dig into. When the blast beats kick in, much of it is rendered into sheer noise (particularly with the tin-can sounding approach).

Commit(ment to) Suicide is not an easy listening experience. If battering ram blastbeats and noisy, muddied riffs are your thing, by all means dig in, but it’s quite a limited draw. For most listeners, it’s safe to say that this one is better left unchecked.