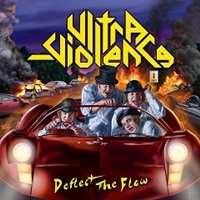 Thrash metal still has pull with the metal generation today – acts like Testament, Overkill, Kreator, and Destruction blitzkrieg from one continent to the next parading their wares to larger audiences, while younger acts like Havok, Suicidal Angels, and Warbringer indoctrinate others closer to their age frame. Italy’s Ultra-Violence hope to stake their claim, obviously professing affinity for the Bay Area 80’s heydays as they nick their name from Death Angel’s debut platter. Their second album Deflect the Flow contains 8 original tracks, one brief acoustic oriented instrumental dropped in the middle as well as a cover of “Don’t Burn the Witch” from Venom’s Black Metal institution.

The quintet throw out a requisite crunchy formula, mixing up the mid-tempo anthems like “The Checkered Sun” and “Gavel’s Bang” (the latter referencing a judge’s main weapon of choice) and double bass, off to Autobahn affairs like “Burning Through the Scars” and “Lost in Decay”. Andrea Vacchiotti and Loris Castiglia probably spent endless hours honing their Testament and Exodus style riffs – as well as some of the offspring like Defiance. Gang vocals for the choruses and whammy bar/tapping exercises also factor in heavily to maintain as much down to earth excitement for the audience on hand.

Occasional blast beats from Simone Verre during “In the Name of Your God” expand Ultra-Violence’s horizons, especially when the follow up passages are much more controlled and groovier for maximum pit meltdowns. Overall though these Italians face a familiarity factor that may be meaningless to the casual thrash fan – but probably bore the heavy duty maniac to tears, as there are better hooks and overall songs available already on the market from the aforementioned influence pool the band pulls from. Add in Loris’ obvious raspy Chuck Billy meets Schmier delivery, and a perfunctory rendition of an early Venom classic and you have the makings of a record that wouldn’t stand a chance to rise the ranks in 1986, never mind 2015.

Maybe third time will be the charm – for now Deflect the Flow needs a shot of originality to stray Ultra-Violence away from their mentor’s rehearsal tapes and into better, more poignant creative flow. 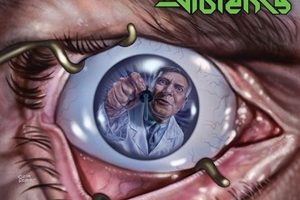