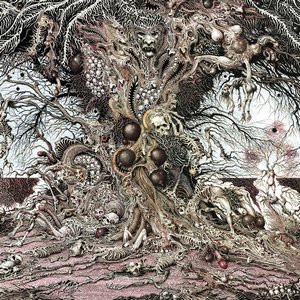 Take heed, for the arboreal and likely sentient horror which adorns the cover of Providence doubles as an indefatigable pursuer across the album. The brand of blackened death that the Oakland trio Ulthar traffics in leaves little respite in its fury for the unprepared listener, which I must woefully admit I was at the outset of my listening. Multiple trips through this half-hour have left me bruised, disoriented, but not always enthused. Solid, all in all.

The black/death label typically elicits the question: how much of each? Providence leans heavily on its death metal foundation but is regularly peppered with blackened vocals or naked-and-on-fire jaunts through the abyss, as in the middle transition of “Furnace Hibernation”. Otherwise the band pushes hard on a riff-centric and steamroller quality yet in a manner more nimble than bands like label mates Tomb Mold., In “Cudgel” the band offers some absolutely disgusting grooves and an outright joyful commitment to succinct song-writing, even in a five minute work.

Opener “Churn” is exactly that, a razor-wire maelstrom that cuts into the listener without an ounce of buildup or pretense. Oddly, it’s also the only track that doesn’t hover in the 4.5-5 minute range, though its impact benefits from its brevity. What little respite that is offered comes primarily with the tension-building openings of “Undying Spear” and “Through Downward Dynasties”. The former offers an almost progressive-thrash quality as it moves from riff pattern to riff pattern, frantic across its run time. The latter is a greater measure in extremes, swinging into doom-like pacing between blackened passages.

No grand gestures, no real surprises in its closing, Providence is a consistent, visceral ride throughout. With that said, it can also come across as same-y as most of the tracks run similar lengths and do not vary a great deal from one another. With that said, I can see those far more schooled in the musical history of death metal having a much richer experience with this than I have, and that speaks very positively for the album, even beyond its surface ferocity. A solid summer offering, arboreal terrors included.