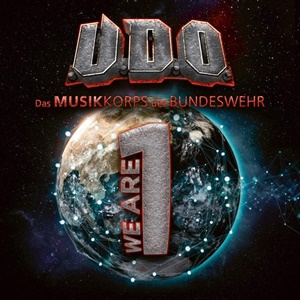 Collaborating with the German Armed Forces Concert Band (Musikkorps der Bundeswehr), We Are One represents a union of orchestra and metal through 15 original tracks, an outing of grand proportions on all fronts. Climate change, pollution of the environment, the 30 year reunion of Germany, and world refugee movements some of the topics covered with the lyrics, while the songs balance the cinematic/epic scope of a sixty-piece orchestra and Udo’s known metal warble against some choir supplementation and steady metal instrumentation. It’s a different side to U.D.O., and as such may be a record that hits the deeper emotional feel spot for some while doesn’t resonate as well for others.

You’ll get triumphant horns signaling the start of a slower, lurching “Future Is the Reason Why”, and the soundtrack spirit of simulated gunfire and building musical movements for the instrumental “Blackout” – while the swinging metal/big band angle of “Here We Go Again” could possibly remind some of “Way Cool Jr.” a bit from Ratt – Udo using a semi-spoken / rock angle to his verse delivery to match the subtle groove maneuvers. Adding Peter Baltes and Stefan Kaufmann for songwriting support definitely gives certain tracks that old Accept charge (the title track and “We Strike Back” especially), guitarists Andrey Smirnov and Dee Dammers flying about their fretboards with classically charged harmonies. At almost 75 minutes, there is a sense that the band and orchestra wanted to deliver an expansive record, but this probably could have been best served with a few less songs to tighten the impact. The exotic Middle Eastern tinges to closer “Beyond Good and Evil” along with the female choir parts from Manuela Markewitz accentuate the dynamic textures that outside elements can deliver, the orchestra again providing alluring waves of bombast and epic support to the arrangement.

U.D.O. with We Are One much like Rage in the past wanted to set a new standard for these types of collaborations – and for the most part kept his known classic/traditional metal traits in tact for the process. Good for headphone excursions or a wider, cinematic experience.