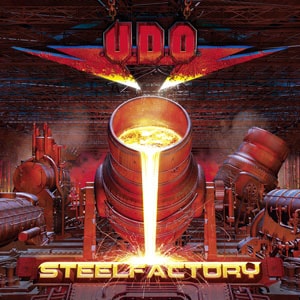 Conducting a world retirement party to all his Accept catalog as Dirkschneider for the past couple of years, it only makes sense that the subsequent studio album for his current act U.D.O. would probably gravitate towards many similar Accept elements. Beyond the fact that the man can’t exactly change his one-of-a-kind gravelly rasp and metal to the bone nature vocally, Steelfactory sees the gentlemen moving along in that steady, pounding European traditional metal veneer that rarely disappoints. It’s not as if ardent followers desire a huge change in the musical script – you pretty much know that the man will deliver a steady diet of mid-tempo to slightly faster anthem style songs, along with the occasional ballad or left-field offering to vary the proceedings a touch.

Infusing the lineup with younger musicians such as guitarist Andrey Smirnov and Udo’s son drummer Sven Dirkschneider ensures U.D.O. has a bit of that youthful energy and attitude to not remain stagnant when tackling tracks like opener “Tongue Reaper” and the stomping march for “Blood on Fire”. The record is jam packed with those infectious riffs and added refrains that along with Udo’s down to earth nature throughout the choruses make it very easy to headbang, sing-a-long, or provide air instrumentation to cuts like “One Heart One Soul” and the “Living for Tonight” cousin “Make the Move”. Veteran artists understand you need to pace a record adequately lest burning out your welcome – thus “Rising High” midway through provides that double kick jolt to increase adrenal production. People may not give enough credit to Udo for the versatility in his approach – he can be just as sinister in lower delivery as the opening verse for “A Bite of Evil” shows, doubling up with his non-duplicate roar in spots to add that chilling intensity to make this a second half highlight. The record ends on a poignant, acoustic-fueled ballad “The Way” – the breathless, reflective nature of Udo’s phrasing going hand in hand with Andrey’s tender plucking.

Previously mastering the last album Decadent, the ubiquitous Jacob Hansen handles the production role for Steelfactory – providing the right balance between modern technology and aligning the nature of U.D.O. as a traditional metal pioneer to get the best sonic qualities you want in a record. In the end, this record won’t tarnish his distinguished career – it slides in nicely with some of his best U.D.O. records (cue Timebomb, Holy, and Steelhammer) while reminding long-time listeners of the glorious Accept records of the 80’s.