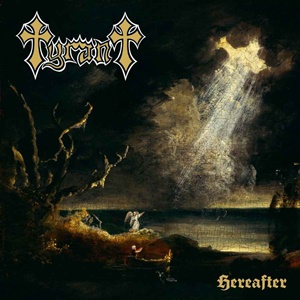 One of the early pioneers of US heavy metal from California, Tyrant developed a cult following through two Metal Blade releases in the 80’s – Legions of the Dead and Too Late to Pray before fading away. Reuniting for 1996’s King of Kings, they’ve been dormant from the recording studio for 24 years again until Hereafter. An epic metal band with doomy textures, it’s no surprise that the band grabbed Robert Lowe (ex-Solitude Aeturnus, Candlemass) for a new singer, as bassist Greg May and guitarist Rocky Rockwell are the long-time veterans since those early days with drummer Ronnie Wallace rounding out the current incarnation of the band. Unfortunately after numerous spins, this material falls very flat in terms of outstanding riffs, relevant hooks, or uplifting energy to really elevate Tyrant to a newer audience, or even gain modest appeal for the old-timers.

The choruses throughout are very repetitive without any subsequent depth or additional dynamic buildups or breaking off points to encourage deeper dives when listening to songs like “Dancing on Graves” or the title track again and again. Which is a shame when you have a higher caliber vocalist like Robert at your disposal – but proves that even in the best of metal situations, middle of the road musical foundations can’t reach superior heights on singing alone. The production values and tones are low-fi and distant, capturing their old vibe down to a natural snare and galloping guitar tone, reminiscent in spots of Manilla Road or Mercyful Fate. Even the acoustic spots within “Until the Day” appear to be forced against the electric supplementation, despite a solid doom groove riff template that would make 70’s Sabbath proud as well as some sinister mid to upper register work from Mr. Lowe. By the time you get to the second half of the album, you are hoping for something exciting, maybe a faster tempo or a surprise guitar passage that shocks the system – but Tyrant just prefers to stay in mid-tempo or slightly slower modes with tracks like “When the Sky Falls” and “From the Tower”, often slamming a hook into predictable epic realms we’ve heard a thousand times before done by others so much better.

Some bands are better off just doing reunion shows for nostalgia’s sake, as creating a record in 2020 that stands out isn’t as easy as it may have been in your youthful guise of the 70’s and 80’s. Hereafter is as run of the mill for this style as it gets.