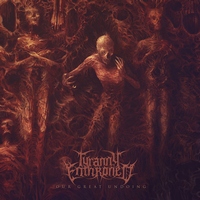 One could say that ‘blackened death metal’ has a bit of wiggle room in its description. One can slide further towards one or the other at any point and still stand by the ole genre tag. There’s space for the band to explore the brutality of death metal yet keep the atmosphere of black metal without moving too far in either direction. But it is precisely in that wiggle room that a number of bands fall short, with the space allowing for a disjointed sound or ending up going too far in one direction. Not so with Our Great Undoing.

The St. Louis band’s sophomore effort does an exceptional job of balancing black and death metal without resorting too far in either direction (and not just playing it safe). Death metal comes through, first and foremost, in the thick guitar tone and the growled vocals. The more brooding tone and atmosphere of black metal acts as a balance to keep them from going too far with the riffs and rendering everything ordinary. Yet they rarely resort to full-out blasts, instead opting for a more mid-tempo approach that does aid with the more brooding vibe. This is coupled with some occasional melodic touches that also work to keep the variety in check across the seven cuts. Some highlights include the opening death metal feel of “Dissenter Chasing the Void,” the blackened atmosphere of “Interpreter of Dreams,” and the fist-pumping riffs of “Mark of Conjured Divinity.”

With this releasing back at the end of 2014, consider this one a ‘late to the party’ review, but it’s worth checking out if you haven’t heard this one yet. A solid approach to blackened death metal that does homage to both without hindering either. Don’t let this one slip through the cracks.