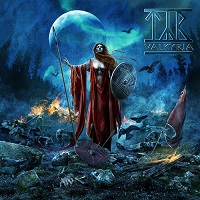 An unlikely success story if there ever was one, Faroe Islands’ Týr have developed from a little-known progressive folk metal to top-tier status (you better have gotten that one). The novelty of the band’s homeland as worn off, thus allowing the music to do the talking. The ample Ragnarok was the proverbial grand entrance; 2011’s The Lay of Thyrm and now their Metal Blade debut Valkyrja are capable, if not universally unique in their own right. Simply, Týr sounds like Týr, which is probably why they got the call up to the big leagues.

As is the case for virtually all of their albums, lead singer/guitarist Heri Joensen is stage front and center, again hoisting his hearty clean vocals like a golden chalice to the sky. Joensen’s pitch, as well as enunciation places him in a league of his own now; he’s more understandable than the man he’s most compared to – Borkanagar’s ICS Vortex, and he’s not afraid to mix it up with vast choir happenings, like on the marvelous “Grindavi’san.” He’s joined by Leaves’ Eyes siren Liv Kristine on “The Lay of our Love,” emerging as the first legit vocal duet for the band, while the heaving choruses of “Mare of My Night” and “Nation” rank among the album’s best.

Nice idea by including two covers: Iron Maiden’s “Where Eagles Dare,” and of interesting note, “Pantera’s “Cemetery Gates.” The latter will certainly get the most buzz, only because Pantera and Týr couldn’t come from more disparate backgrounds – Texas, and a small island off the coast of Norway. Nevertheless, it’s a risk well-taken, providing a nice little bow to Valkyrja that should only help Týr in their gradual climb to the top.