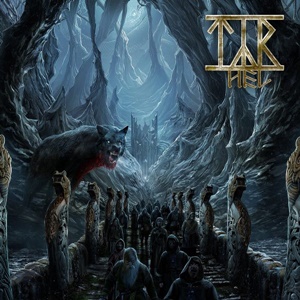 Triumphant through perseverance, Faroe Islands act Týr are legitimate headliners thanks to a consistent record/tour/record/tour schedule – especially from Ragnarok to Valkyrja where there were five studio albums in eight years. While starting out from more of a progressive folk metal stance, it’s obvious that the band have turned into more of their power/traditional metal affinities, yet not forsaking that folk/pagan aspect that attracted many to the fold. Taking care of some behind the scenes/management issues, Hel as the eighth Týr album comes six years after their last release – and continues to explore more of their power-oriented penchant, throwing in the folk elements when necessary while delivering a 13 song, 69-minute platter that keeps the metal pumping.

It can be the rhythmic bass/guitar activities that propel “Gates of Hel” or the natural call to arms riffing and vocal playfulness during “Downhill Drunk” that illustrates the deep understanding of emotional versatility and execution that are always firing on high for the quartet. Then you’ll get the native tongue outings such as “Ragnars Kvædi” or “Garmr”, the latter intertwining the two languages while the twin guitar harmonization rings out to the cultural hemisphere in a short yet quite effective vein. Heri Joensen has one of those bard-like mountainside deliveries that is one of a kind – when combining with bassist Gunnar Thomsen elicits war cry moments for “Fire and Flame” and provides heaviness to the extreme squeals and wilder lightning fast runs for the otherwise fairly mid-tempo outing “Empire of the North”. Dense would be an apt description of the details to these songs – proper layers of guitars, bass, drums, and choirs, while emphasizing the best melody and harmony aspects throughout. The instrumental sections appear a little more detail-oriented, extended lead breaks and intros/outros often showcasing Hel in a progressive yet crunchy, downtuned riff mold.

There’s plenty to devour, discuss, and dissect regarding Týr in their current state – choosing to explore their power and progressive metal side of things this deep in their career shows they want to challenge themselves as well as the listeners. That could prove to alienate some and bring other newcomers to the flock. In the end, Hel is addictive, thought-provoking, and sure to appease those who have patiently waited for new music from the band.