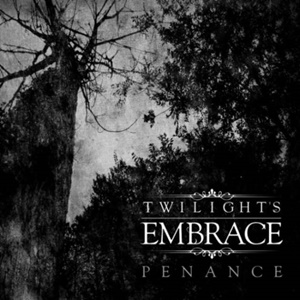 When you hear a name like Twilight’s Embrace, most consumers know they won’t be expecting an uplifting, happy power metal experience. And they would be correct – for this UK outfit swim in the gothic meets melodic doom/death waters as far as a platform and have been since their 2010 beginnings. With a discography comprised of two EP’s and a full-length By Darkness Undone (the latter this scribe reviewed for another webzine in 2014), this bring us to their latest release, another four-song EP in the form of Penance. Once again, the versatility and command of bridging together diverse influences into this hypnotic, soul stirring experience makes these tracks a force to be reckoned with if names like Katatonia, Insomnium, Primordial, and Ghost Brigade tickle that aural connection.

As guitarists Ben Sizer and Jack Thorp drive the musical component of Twilight’s Embrace – filling the landscape through subtle melodic transitions against driving mid-tempo or doom riffs, becoming distant to dramatic right away for “Dying Earth” and cultural with a Scandinavian flair for the nine-minute plus title track. Sometimes taking a root note or riff and branching off through circular, clean playing intensifies the subsequent parts, the rhythm section mechanics perpetuating the groove factor in that doom/gothic context. A reverent appreciation for Paradise Lost circa Host shows up in the final cover cut “It’s Too Late” – ironically the shortest at 4:29, containing a sparse beginning with clean, lower register vocals before transforming into a heavy, somber reflection of doom/death as the guitars cascade against the Andy Walmsley growls to wash away any misery or sorrow. Carefully crafted, brilliantly executed, the band understand that even at slower paces with darkness at hand, it’s all about developing ideas and fleshing them out into a logical flow that can capture the listener from first note to last.

Whether by choice or the silliness of music reps not understanding proper potential, Twilight’s Embrace belong in wider company as the above-mentioned Scandinavian and UK peers – Penance a pinnacle release for the band, hopefully embraced by larger hordes.