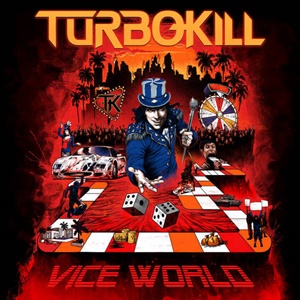 This German metal unit formed in 2016 following singer Stephan Dietrich’s departure from Alpha Tiger – setting about his personal vision for a traditional metal style with modern aspects. Recruiting the best local musicians he could muster, they recorded and released a debut self-titled EP that received massive praise in the German press, securing a deal with Steamhammer/SPV to arrive at Vice World – their first full-length record. Gaining inspiration from veterans like Iron Maiden, Judas Priest, Running Wild, and Accept, the foundation of Turbokill roots itself into catchy melodies and hooks of a mid-tempo to slightly faster variety – making for an energetic, uplifting outing where listeners will find themselves joining in for musical air simulation or unison singalong chorus moments.

The first aspect that is immediately evident is the multi-octave vocal prowess and personality within Stephan’s delivery – the man knows how to place his activities in that traditional/power range to grab attention through Tate/Halford-esque piercing moments and measures that leave your jaw agape. Check out the fun power swing to bluesy number “Pulse of the Swarm” or Accept-like anthem “End of Days” for two vocal tour de force efforts where Stephan takes the arrangements to that extra astounding level through his precision and professionalism plus proper multi-tracked harmony sections. Dual guitarists Ronny Schuster and Daniel Kanzler fill the sonic landscape with a mixture of riffs and searing lead combinations – the title track and “Kill the Lie” two distinct standouts, the latter containing a building nature to it’s clean to militant rhythms as if combining Armored Saint, Riot, and a bit of early W.A.S.P. to the proceedings. Some of the lyrical content reaches modern concerns with “Global Monkey Show” discussing the spending spree mentality of today’s society as well as the constantly plugged in smartphone nature to “Track N’ Spy” – outside of the expected unity/ uplifting themes these records typically treasure. The eleven songs in the main beyond “The Grand Delusion” short intro have the right dynamic flow, keeping the record at an ideal 46-minute vinyl timeframe so as to not overstay it’s welcome and make for easy return engagements.

The tones and production values give Vice World a slightly fuller/modern punch a la Striker, which this scribe believes is a good thing as you can have an older influence tree to draw from while using the current tools for establishing a wider following. Knowing Germany is a traditional mecca for this style, Turbokill have delivered a strong full-length with catchy hooks, metal to the bone riffs, and searing melodies that make you want to scream, shout, and raise fists high to the sky.