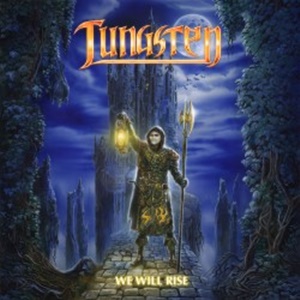 When you’re the ex-drummer of Yngwie Malmsteen and Hammerfall, and your sons light the fire to form a new band based on their songwriting, it’s obvious that Tungsten would take shape and become a living, breathing entity. Anders Johansson started this in 2016, bassist/keyboardist Kalle and guitarist Niklas the two sons involved in getting dad back in the game, and they recruited Mike Andersson (Cloudscape, Fullforce) to fill out the lineup. A meeting of the minds and unique viewpoints so to speak, as youth and veteran musicianship combines to unleash a sound that has its footprints in both the old school and modern outlooks. Let’s delve into the twelve songs that comprise We Will Rise, shall we?

Where the newer aspects come into focus are the crunchy guitar tone and semi-industrial/groove-laden aspects for rhythms and keyboard sequences – allowing Mike vocally to explore some of his mid-range nuances and color the songs in unique flavors, most evident on “Misled” where the hook has a bit of that electro/Rammstein-esque punch. Kalle also throws a bit of folk-ish charm in his ivory play – contrasting against Niklas’ power riff foundation that works brilliantly for Anders straightforward drum groove during “The Fairies Dance”. When the band lay into a heavy riff and surround it with the right background vocal and groove/stomp aspects to decorate the proceedings, you get “As I’m Falling” for a mid-album highlight, Mike contrasting his delivery between a militant forcefulness for the verses and his smooth, melodic register during the chorus. A bit of bass heroics open “Sweet Vendetta”, the main guitar/keyboard sequences favored by those into Amaranthe as it’s got that theatrical swing aspect, while “Remember” drills home some solid power hooks reaching back into early Rainbow and even a bit of Hammerfall, even with the surprising modern screams that pop up in spots.

Creating Volfram, the man on the cover, is renowned artist Andreas Marshall (Blind Guardian, Hammerfall) and probably will get its fair share of attention because we all know the importance of proper art in metal. Leaning a bit more to that modern electro/stomping groove metal side of things, Tungsten offer an intriguing mix of the old with the new, and as such We Will Rise sets the band up for a wide array of possibilities for future records.