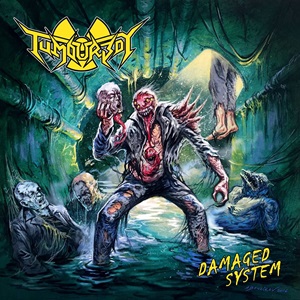 Always appreciative to hear metal from exotic locales, and given the government restrictions for decades towards the genre, it’s satisfying to finally enjoy a quartet such as Tumourboy, hailing from Beijing, China. Releasing Noise.Beer.Love as their debut EP in May 2016, the quartet quickly turned around to issue a full-length, both through local label Mort Production. Germany’s Witches Brew recognized their penchant for 80s style thrash, putting out Damaged System for an international audience and tacking on two bonus tracks to make the package slightly more attractive.

Blazing a trail that contains an equal amount of verve and velocity as the East Coast/ West Coast camps from the USA during the early thrash development, Tumourboy prefer to keep things lean and mean, shifting between conventional up-tempo crossover methodology and the razor-sharp transitions sure to cause bodily damage. Qu Jiashu holds down double duty as a guitarist/vocalist, shrieking and spitfire nuances his preferred mode of conveying the lyrical themes of nuclear destruction (“Chernobyl Devastation”), cell phones (“Sacrifice of Technology”) as well as a love of the Dexter television series in “Bay Serial Killer”. The tone and attack from drumming and bass play to gang vocal supplementation on “Noise, Beer, Love” and the title cut favor an affinity for all-periods Nuclear Assault, early Anthrax as well as a bit of Slayer/Vio-lence, the stop/start movements precise while many of the lead breaks from Qu and second guitarist Zhang Chi just go for broke in wrenching out every last tap or squeal as underground thrash was meant to be performed.

Tumourboy won’t be considered top echelon at their craft – the vocals will be an acquired taste (akin to early Cyclone, or a John Connelly/Sean Killian blend) and it’s easy to find reference points for the songwriting. Yet there’s something special in regards to the take no prisoners fiery assault these gentlemen deliver that’s hard to replicate – no matter if this is 1987 or 2017. Add in a creepy zombie/ sewer system cover and Damaged System aligns well with most thrash minded maniacs.