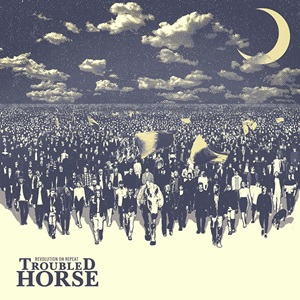 Ask your average musician what they would call their music, and you’ll get a wide array of answers. Chances are, though, most hate being boxed into specific categories. Tags often come with prejudgement before a note is heard – which would be a shame in the case of Swedish band Troubled Horse. Because there is a lot going on to this second album Revolution on Repeat – it’s heavy, occasionally psychedelic, and has a righteous mix of punk attitude and doom nuances to go down a storm.

This scribe enjoys musicians who are intent on delivering what comes from their heart – regardless of norms. If they wish to throw in a drum solo in the middle of “The Haunted”, or a funky, almost old country passage that signals a gunfight showdown for “The Filthy Ones”, Troubled Horse run with it. When the circle comes around, the essence for these players is still about heavy handed hooks – guitars that magically go for the throat, along with a soulful singer in Martin Heppich who conjures up everything from Jim Morrison to Glenn Danzig in a massively engaging, hypnotic manner to connect. Piano pulsations weave around a winding rhythm guitar part for “Peasants”, where the opening feels like Motörhead at their best only to mutate into this bluesy heavy rock throwback perfect for downing a six-pack in the sun. Lyrically tackling many of the current ills of democracy in the world – the quartet seem well-aware that even if an uprising occurs, things will probably fall back into conventional society norms. The twin guitar runs and ominous doom riff swarming around ‘being born in the 80’s/ and never having a voice’ gives “Track 7” spotlight, poster board material in the second half of the record. Closing with the nine-minute “Bleeding” that has a psychedelic ballad build up and break down along with orchestral dynamics making you think Kansas has entered the Troubled Horse rehearsal space, there’s plenty of talent- and versatility- on display.

While Graveyard and Witchcraft are probably further along in establishing their discography and live touring escapades, Revolution on Repeat provides a decent case for Troubled Horse to wedge itself in that retro-70’s amalgam conversation to be in the mantle race.