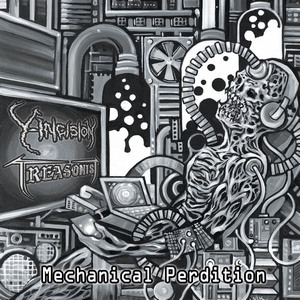 Are you a slave to the grind? If so, you’ll probably be pleased to come across this split of Treasonist and Y-Incision, two grinding death metal bands with some similarities and differences in their approach (as a good split should showcase). What’s even better, is that each band takes one of their tracks and covers the other’s song (though the originals don’t appear alongside them) – a fun divergence that more bands could get involved with in the future.

The first six tracks belong to Y-Incision, who brings more of a broad range of influences to their berserk flavor of death grind. Some smatterings of punk and hardcore give them a distinctive contrast to that of Treasonist, and the band’s sense of humor is about what you’d expect (title highlight: “This Ad Isn’t Running Because It Includes An Image Or Video Depicting Excessive Skin Or Nudity”). Tight, explosive bouts of grind is what you get, with the hardcore/punk vibes coming through the assault and giving it a more direct flair and abrasive edge. An enjoyable whirlwind overall, with just enough groove to keep you interested.

The last seven tracks are from Treasonist, and they hit a more chunky and pure death grind flavor. There’s a more technical feel to some of the riffing over the course of the tracks, which again stick to the 1-2 minute timeframe for the most part. The speed and technicality give the songs an urgent feel, especially with the buzzsaw grinding of the guitars. There’s also a bit more of a brutal approach here, with some punchy grooves (“Unleash the Beast”) again working to provide some immediate hooks to contrast the heaviness.

While neither band really goes outside of their genre’s comfort zone, they both feature some catchy hooks within their more aggressive frameworks in very energetic forms. Splits are best when they have two bands that play a similar style in a different way, so Mechanical Perdition should work to introduce fans to either one or both bands here.