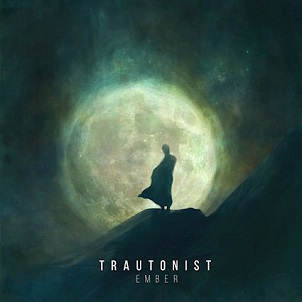 No real “shade” coming from German black/shoegaze duo Trautonist, if you catch our drift. The pair’s brand of post-black metal (a style that’s still at it, remarkably) doesn’t exactly possess the biting cold or foreboding landscapes for which its sound is associated with, but that’s what you get with anything under the “post” or “gaze” handle. Things tend to get sunny, which is the case on the band’s sophomore full-length foray, Ember.

Characterized largely by those spinning, washy chord-scapes (and shapes) along with the soft and oftentimes harsh vocals of Katharina, Ember essentially feels like it’s being played by folks with scarves draped over their necks versus gauntlets and leather. (Now, that would be the day: shoegaze black metal in such attire!) Nevertheless, the unimposing “Fire and Ember” at least sets up the far more aggressive and striking “Vanish” nicely as multi-instrumentalist Dennis gets moving on the blasts. Further (and warranted) excursions into natural, non-black metal-oriented shoegaze come via “The Garden” and “Smoke and Ember,” the latter, in particular, carving itself out as a likeable, dreary ’90s rock outpost.

With chances of this landing properly in the laps of the tried-and-true black metal force virtually nil, Trautonist’s rather obvious dalliances with shoegaze and alternative rock ultimately emerge as the defining moments on Ember. Whether it’s the aforementioned “Smoke and Ember” or the bouncy, driving “Hills of God,” Trautonist translates more into a band who is better at sticking to the music they should naturally be associated with (shoegaze) than trying to infiltrate the black metal scene. That’s not happening.