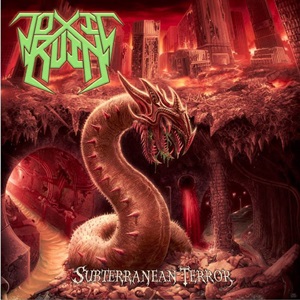 Intent on delivering monster riffs and ruling the world, East Wisconsin band Toxic Ruin unleash a potent thrash metal cocktail for this full-length Subterranean Terror. Together since 2010, the quartet embrace a wide array of sub-genres to push this material into progressive terrain while also gaining a little nod to the old school and modern metal nuances for versatility’s sake.

The key to sustain interest comes down to dynamics in thrash – bands that are stuck in too much speed or similar arrangements can diminish full playbacks. Fortunately for the listeners, Toxic Ruin construct a diverse ten track selection of mid-tempo to slightly faster thrash numbers with a boatload of exciting guitar tricks, harmonies, and change ups to keep you aurally engaged. A lot of the guitar sequences and runs during the title cut or “The Human Condition” often possess this late Death-era ambiance, circa Symbolic – if thrown into the Havok/Revocation mixer. Drummer David Miller and bassist Stephen Behrendt keep the rhythms lean and mean, injecting the right doses of energetic uplift or fluid fill nuances when called for. Chubzy McDuff has a roar/scream duality to his vocals that probably puts him leaning more into the Lamb of God/ Pantera delivery scope than necessarily a straight ahead melodic crooner – his personality shining through on the faster “Immolation” (think Exodus/Forbidden here).

Guitarist Jacob Baneck handles all the rhythms and lead work as a seasoned pro – unveiling an arsenal of taps, whammy bar action, and speed licks amidst the heads down axe play necessary to crush and impress for this genre. Neckbreaking antics for “Seat of Corruption” and the gallop-ish “Lord of Pandemonium” give off a lot of Bay Area vibes, but also trigger some thoughts of the much missed Realm who also hailed from Wisconsin. Top things off with a vibrant, in your face production plus a killer logo/cover and you have a great product on your hands if you want something a bit more advanced than the same old regurgitated formula those young-uns favor. 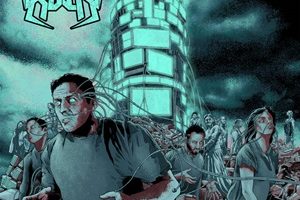