Toxic Holocaust – From The Ashes Of Nuclear Destruction (Relapse Records) 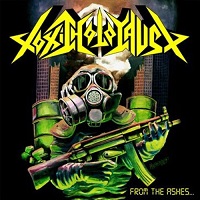 Toxic Holocaust, more specifically lone ranger Joel Grind play thrash at its most basic. While they’re not quite at remedial level, Grind’s ideas lean mostly on the simplistic side, which may or may not be the main translator for his success in such a crowded field. However, through the gamut of easy-to-pick-up riffs and barbaric beats, Grind is able to display an innate catchiness, thus explaining the relative success of An Overdose of Death and Conjure and Command. That, or folks like their thrash more uncomplicated then previously lead to be.

As a collection of rarities from the last ten years, From the Ashes of Nuclear Destruction is predictably all-encompassing for a compilation. Twenty-one tracks are to be found, some of which with varying degrees of recording quality, which could be where the whole “charm” factor comes in. Grind handles everything here (we believe), so the mounds of cymbal chokes, polka turnarounds, and punkified riffs are agile and frisky, while lyrical matter never gets past the 4th grade (see: “Thrashing Death,” “Death Stomp” and “We Bring ‘Em Hell”).

Productivity stands for something, though, and From the Ashes of Nuclear Destruction fits the billing of “completists only,” while giving Grind a platform to release the various odds and sods he’s primarily responsible for. It’s not like you’re getting anything new here; 1986 is in the house all the way.