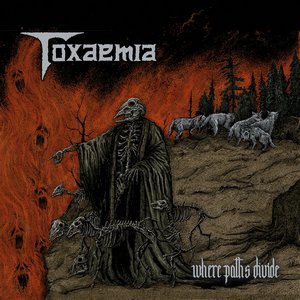 Thirty years is a hell of a long time to be sitting on a full-length debut. But after releasing a demos and 7” EPs between 1989 and1992, Toxaemia called it a day. Reforming in 2017, the band now almost thirty years later is releasing their first full-length album. Is it better off stuck in the past or is it a pleasant bit of old school death?

First off, despite their geographic location (Sweden) and history, there’s probably a crew out there happy that this isn’t simply Entombed/Dismember for the thousandth time. Instead, there’s a more olden death metal base, and one that has taken a liking to thrash too. If any band comes to mind when listening, it’s more Malevolent Creation than anything else. But there’s only some passing resemblances there, so it carries the spirit of the retro crowd without embodying any particular acts. A tough feat here in 2020, but something the band should be proud of. As one could imagine, this one is all about the riffing for the most part. The retro spirit can only take one so far, even if it’s from a band that was legitimately there at the onset. So bouts of frenzied tempos (see “Buried to Rot”) give way to more groove-based and oozing tempos (“Black Death”) while still maintaining a more raging quality to them thanks to the somewhat thrashy vibes. Dan Swano’s sound on this one shines through, and provides a clarity even when the band is speeding up in a way that starts to sound pleasantly unhinged. The melodies hit when it counts too, such as with some memorable ones in “Six-Fold Revenge,” with boost the track with a catchiness that comes without compromise.

Certainly a long time in the making, it’s better late than never when it comes to Where Paths Divide. Toxaemia can stand tall in releasing an album that does pay respects to where they came from, but doesn’t keep itself entirely stuck in the past either.