The fact Tortorum is a true black metal band from Bergen, Norway isn’t enough these days. There are a lot “true, (oops, we mean “troo”) BM outfits of substance across the globe, from Little Rock, Arkansas to Adelaide, Australia, so the once-impenetrable front of Norwegian black metal has lost a bit of its shine. Then again, there’s not much substituting for the genuine article when it is in fact, genuine, like Tortorum. The band – who formed in 2010 – play an adventurous, disharmonious concoction of black metal, one that amounts to a relatively enjoyable listening experience by way of their sophomore album, Katabasis.

With an audible, better-than-expected production job in tow, the band’s riff forays become instantly in focus. Utilizing odd chord combinations, as well as sleek use of speed-picking, and guitar layering, Tortorum’s guitar tandem of Skyggen and Spekter deserve instant recognition for their ability to avoid the general trappings of traditional, and, lazy riffing within black metal. The caustic buzz created on “Severance and Perseverance” is a definite highlight; the thrash-topped push of “Open Wide the Gates of Chaos” pushes along the same way Emperor did during their glory days, while the non-stop, magnified onslaught of album closer “Beyond the Earth and Air and Sun” is one of the few occurrences of a nine-minute BM song retaining its cohesion and functionality when the song in question wrangles constant blasting.

A real sleeper in black metal circles, Tortorum makes significant headway on Katabasis by adhering to the sound’s standards, as well as cultivating a set of riffs that frankly, most bands on any side of the ocean(s) would die to get their gauntlets or black rim eyeglasses on. Quite recommended, and, a band to watch in terms of defending the old guard. 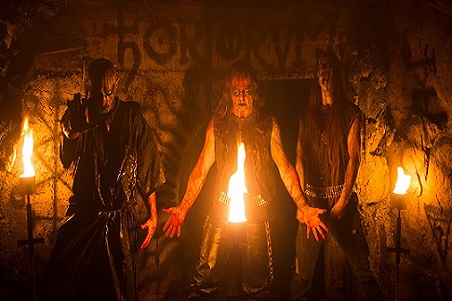