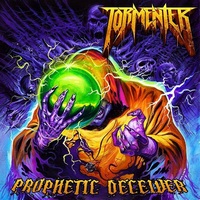 Hearing the Bay Area influences come through the ’80s-rooted thrash sound of Los Angeles quintet Tormenter on their sophomore full length effort, Prophetic Deceiver, was no surprise, but what I didn’t expect to hear was the equally healthy dose of Floridian death metal elements.

Having formed in 2007, Tormenter have a couple demos, EP’s, a single, and now two full-lengths to their name. With Prophetic Deceiver, their latest, what struck me right out of the gate were Carlos Rodelo’s vocals, which are a mix of John Tardy and Chuck Schuldiner (especially in closer “Cosmic Collapse”) when he’s snarling out the verses, while his screams, though used sparingly, approach Marcel “Schmier” Schirmer territory (see the intro to “Sacrilege”). Although the vocals have more in common with the Florida DM scene of the ’90s, albeit barked out in a typical thrash cadence, the riffs on Prophetic Deceiver are decidedly thrash.

What the band may lack in innovation, it more than makes up for in lethal execution. Opener “Snakes in the Throne Room” starts with a haunting instrumental intro, but guitarists Jahir Funes and Joey Cazarez, who both share rhythm and lead duties, quickly push the tempos, spitting fiery yet catchy melodies over Thomas Bonilla’s pummeling double bass, giving the feel of a locomotive running off the rails. Bonilla’s sledges of double bass punishment are all over the record (check out the start/stop mid-tempo “Hanging from a Noose” for further proof), providing a blistering backdrop to the six-string salvos of Funes and Cazarez, who give their fret boards a sufficient burning on the eight songs (“C.P.R” is a brief instrumental breather, though filled with intricate lead work) contained on Prophetic Deceiver. Whether on the title track or “The Final Form,” bassist Kory Alvarez is not to be forgotten, as his prominent, almost jazz-y melodic bass runs are ever present and prove he more than carries his weight throughout the proceedings. Highlights include the sidewinder rhythms of “Exile from Flesh,” complete with gang-shouted vocals in the chorus, and the sturdy mid-tempo riff action of the circle pit-ready “Critical Stasis,” delivered in skull-crushing Exodus fashion.

Although the thrash waters are infested with scores of retro retreads these days (for the record, as long as these newer bands can pen killer riffs, I’m not bothered if it’s at the expense of forsaking originality), anything these bands can do to stick out and separate themselves from the heap will only help in matters of future long-term success. Prophetic Deceiver should be an indication that Tormenter possesses the tools and talent to do just that.