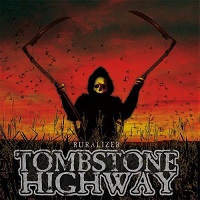 “From the muddy shores of the Po River in Piacenza” doesn’t quite have the same ring to it as “from the Bayou” or “The Muddy Banks of the Wishkah” (holy smokes, a Nirvana reference? Yikies!), yet Italy’s Tombstone Highway sure come across as the genuine article on their Ruralizer debut. Positioned as the European answer to the porch-plucking, commercial sludge that Zakk Wylde has come to both embody and popularize, Tombstone Highway know their way around a good tune. All that is missing is a shotgun and some moonshine.

Surprisingly, head Forgotten Tomb grumbler/all-around character Herr Morbid is out front, handling guitars, vocals, and the stray banjo pluck. Seems that Morbid has a side to him that one would never guess from his work in Forgotten Tomb (to the band’s credit, they have covered a lot of non-metal bands), giving Tombstone Highway instant separation from his main act. Once past the surprise, Morbid (portrayed as H.M. Outlaw here) has his guitar dialed up to the same specs as Wylde during the Pride and Glory days. Bereft of Wylde’s annoying artificial harmonics, Morbid’s playing is full of swagger, and easy-going riffs, like on “Acid Outlaw” and “At the Bitter End.”

Because of these songs are so engaging, the aforementioned banjo isn’t even a second thought on opener “Outlaw Blood” – it’s just there, adding to the mix. Morbid keeps his vocals discernible and rusted, like a blacked-out Pepper Keenan, if you will. Look out the massively heavy “Graveyard Blues” or the excellent cover of Mountain’s “Mississippi Queen” – if one wasn’t paying attention, you’d swear this was the literal love-child of Black Label Society and Deliverance-era Corrosion of Conformity. Well done.