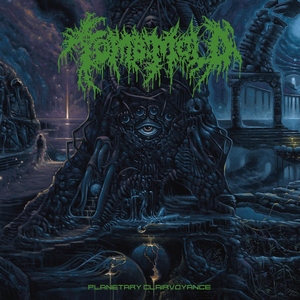 Rare is the band that can pull off three albums in three years. It certainly happens, and sometimes it’s best to strike while the iron is hot, but it’s not for everyone. Fortunately, Tomb Mold is one act that has been able to stay on top of this aspect, and manage to ensnare a significant amount of hype behind them while doing so. Planetary Clairvoyance does nothing if not cement them as one of extreme metal’s bands to watch.

The band has gotten noticeably tighter and more diverse in regard to their songwriting since Manor of Infinite Forms. They can handle that swampy, murky death metal edge and give it some mystique and variety when some bands simply double down on the murky qualities. That thick, swampy feel can be great, and here it’s used in the right increments. It blends nicely with their ability to plant some Finnish doomy feelings into their attack to provide that eerie sense of gloom. But they can also push out the riffage when needed as well, with direct bouts of carnage benefiting from the massive guitar tone and otherworldly melodies that infiltrate the tracks. “Infinite Resurrection,” for instance, has some crushing tempos and punchy riffs but doesn’t hold back from a moment of doomy slowdown or off-kilter melodies – as does its’ follow-up in “Accelerative Phenomenae,” which ups the ante with its barbaric mid-tempo riffs and bludgeoning upticks in speed (and dizzying solowork). Beneath the visceral riffs and pounding aggression, there’s an attention to melodies, particularly in the soloing, that is admirable. With the added tempo changes and fluctuation, it really makes for many memorable moments in each track – all with the grit death metal fans want.

Tomb Mold continue their cosmic-themed death metal journey with Planetary Clairvoyance in ways that manage to increase their appeal and sharpen their songwriting edges. The combination of Demilich-esque oddities, straight-ahead carnage, and nuanced melodies keeps things interesting and strangely fun for music of this style.