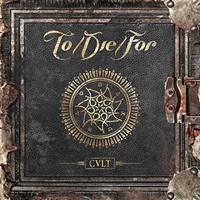 Finnish eye-liner Goth metal never quite had the lasting appeal many thought it would after the breakout success of HIM. It’s arguable whether HIM is a metal band or not (cue “Love Metal” tag), so down to the next level we go, which includes Charon, Entwine, and the band in question, To/Die/For. A band with a spotty history, the Finns have survived label changes, temporary splits, and member changes, landing on their seventh full-length, Cult, which also happens to be their first album in four years.

The balance of moderate metal muscle and swoony Goth offerings comprises the bulk of To/Die/For’s sound. They’re not exactly in the same ballpark of the real masters of the style, Sentenced, yet their song-first, pouty renderings on a song like “Screaming Birds” demonstrates the Finns are capable of busting out a radio-friendly, melodic jam when need be. Vocalist Jarno “Jape” Peratalo certainly has the leather-lined lungs to work such melody-driven wonders; his husky breaths have ample persuasion to them on the aforementioned cut, as well as the piano-ballad “Mere Dream,” which, of course, is where the wrists start to bleed and the darkness envelopes. (You would think.)

An unforgivable cover of Paula Abdul’s “Straight Up” nearly derails Cult altogether. Perhaps taking a cue from their fellow countrymen Children of Bodom in the goof-off cover song department, “Straight Up” sucks the serious air out of the album, even if does sound like Peratalo and gang are trying their hardest to play the song with conviction, female backing vocals and all. Not a wise idea, gentlemen.

Part of the draw and part of the drawback with bands like Charon, Entwine, and To/Die/For is that their output is usually terribly lopsided. For every winning number ala “Screaming Birds,” there’s a handful of songs that should have been left on the rose-strewn cutting room floor, especially the Abdul cover. C’mon!