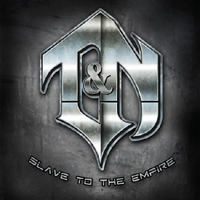 We all know about the big four in metal (referring to the thrash legends), but did you know there is also a big three too? I am referring to the guys in Dokken who comprised the classic line-up during the 80’s. You get guitarist George Lynch, bassist Jeff Pilson and drummer Mick Brown all conspiring to creating new music without the services of lead vocalist Don Dokken. Is this going to be a blasphemous affair? Or is it simply three good buddies getting together again for the sake of the music that made them rock stars in the first place?

I say the latter is happening here and when you give this disc a spin, it’s so evident how much these three enjoy making music together. They call themselves Tooth & Nail, although it was shortened to just T&N for fear of a lawsuit. They’ve recorded seven new tracks and re-recorded five Dokken classics to round out their Slave to the Empire debut. Of the five Dokken classics, the thinking was to bring in a handful of quest vocalists, so Doug Pinnick (King’s X) gives a soulful approach to “Tooth & Nail,” while Robert Masson (Warrant) does an admirable job handling lead duties on “It’s Not Love.” Then Sebastian Bach performs a solid rendition of “Alone Again” and Tim “Ripper” Owens supplies a Dio-esque performance on “Kiss Of Death” to help close this portion.

Now getting on to the new material, Pilson steps into Don Dokken’s shoes and does an outstanding job on lead vocals. His take as lead singer is fresh and confident sounding throughout the seven new tracks. The sound on the new material is largely progressive, heavy, dark and bluesy in parts. The opening title track is catchy and grabs your attention immediately, while ynch’s solo is conservative sounding, but there’s no mistaking his fretboard mastery. “Sweet Unknown” is where Lynch truly cuts loose and he delivers a solid performance, and is followed up with some serious sleaze rock moxy on “Rhythm of the Soul” and pounded home on the bittersweet “When Eagles Die.” There’s not a bad track to be found on the new stuff, and when you get to the closing track “Access Denied,” the intensity level goes up a notch.

Rumor has it that T&N is actually going to be a two-part record, so we can expect more of the same. At least I hope we are getting a continuation of quality music from these three and I am sure the inspiration found on this recording will serve them well for future endeavors. T&N is pure triumph from a musical standpoint and on a personal level, a feel-good story about three friends enjoying the camaraderie of playing music together. These three are not slaves to the empire, but rather commanders of the empire they so lovingly helped to build as members of Dokken. I can’t wait to hear more new music from the big three.