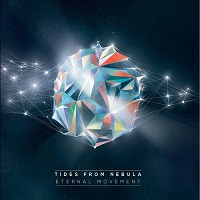 The Polish post-metal instrumental entry, Tides from Nebula, as expected, engage in those well-worn, toughened, but dainty quiet-loud-quiet dynamic set, which is really the best way for a band of this kind to operate. Since there’s a total lack of vocals (one would think they’d at least go the Long Distance Calling route and bring in a guest vocalist or two), there’s maximum room to stretch one’s sea legs with soft guitar peddles, clean-channel embraces, and bright melodies. In essence, Eternal Movement (their third overall) couldn’t fool anyone if it tried, but that’s not the point.

Generally, the best band to put the likes of Times from Nebula up against would be prime-era Pelican, perhaps the only band to master the “art” of instrumental post-metal. Like Pelican, the Poles never become too infatuated with one riff; there’s ample amount of movement (“eternal,” right?), thus the atmospheric flavor of “Laughter of Gods” as well as the well-imagined (love those transitions) “Emptiness of Yours and Mine” are instant winners. And really, pay no mind to the Pelican connotation – Tides from Nebula bear little resemblance to the gradually-fading Chicagoans – there’s loads more prog here than meets the eye.

The band would probably tell you “full immersion is required” to get a handle on Eternal Movement, and that’s likely the case. But alas, Tides from Nebula don’t strike one as a band capable of shaking up the instrumental field. They’re just yet another outfit armed with familiar idea strokes, ones that when taken as a whole, are quite hard to dislike in the end.