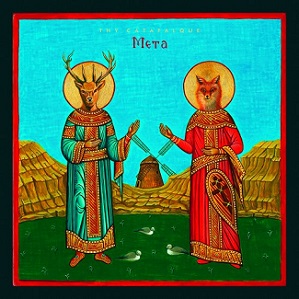 This scribe remembers the waning days of cardboard promos, which would put us around 2011. The digital onslaught had all but negated the need for physical product, including how journalists received music. Streaming or downloads were in; CDs, were not. Some labels were slower than others to transition from CD promos, including the venerable Season of Mist, who graced yours truly with a handful of albums from their Underground Activists imprint, as well as the newer, more exotic bands they were pushing. In said package happened to be Thy Catafalque’s rather odd, but intrepid Rengeteg. Interest piqued.

The product of Hungary’s Tamás Kátai, Thy Catafalque embodies the definition of avant-garde. Kátai’s explorations on Rengeteg and last year’s Sgùrr have seen the man dabble in bubbling black metal, soul-crushing doom, electronic music, and music relative to his Hungarian homeland, complete with multiple female vocal excursions. The pattern continues with Meta, an album of obvious depth and experimentation. The sprawl here is rather impressive, with Kátai pumping in Euro-dominate synths on “Uránia,” crisp, guiding melodies on “Malmok járnak” (a song that tips the time scales at over 21 minutes), and voluminous doom on “Mezolit,” which serves as Meta’s most immediate number.

The versatility of Meta is perhaps best represented on “Vonatút az éjszakában,” a strolling, free-form jazz number that finds Kátai crooning his native tongue over a run of dueling guitar harmonies. In turn, you won’t find metal like this coming from anyone else other than Kátai, whose instrumental and compositional abilities should warrant more recognition. Meta is equally perplexing as it is palatable, an album ripe for the challenge, sure to scare the spoon-fed away.