Thy Antichrist – Wrath of the Beast (Napalm) 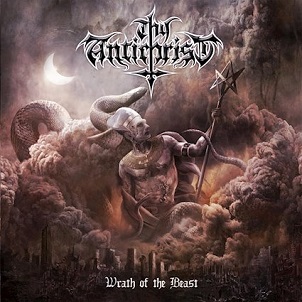 Dallas-by-way-of-Columbia black metal troupe Thy Antichrist start Wrath of the Beast with a Spanish-styled acoustic guitar, perhaps signaling this isn’t your standard fare BM foray. (What actually is “standard fare” is widely debatable anyway.) It signals a band often willing to peek around the corner of what’s expected, which could be why the ever-growing Napalm Records summoned them to their ranks. Their first full-length in 14 years (some splits and compilations followed along the way), Wrath of the Beast finds Thy Antichrist darting across the hot coals in their own fashion, a welcome sight indeed.

Where Thy Antichrist will catch people is with their riff combos. Dissonance is applied — as it should be — but these riffs have an exotic churn to them, perhaps more than a band they may get lumped in with, Inquisition, if for geographic purposes only. While Inquisition has little finesse to their sound, Thy Antichrist supplies wind-tunnel thrash riffing (“Metal to the Bone”), blunt-force savagery peppered with a myriad of vocals (“No Place Like Hell”) and somberness (“Walking Through the Soil”). In effect, Wrath of the Beast is a well-rounded affair; sort of like a black metal smorgasbord without going off the rails.

Their interesting career arc aside, Thy Antichrist have seemingly made up for years of going unnoticed, making this scribe wonder what the hold up has been the whole time. Nevertheless, a veritable catch-all, domineering, blazing and infectious offering, Wrath of the Beast positions Thy Antichrist as the antithesis to the now-waning Cascadian movement, a scene full of bands who would never stand a chance against the Texans.