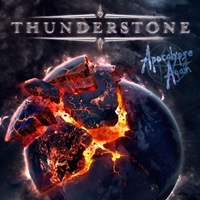 After a prolonged absence from his vocal seat, original singer Pasi Rantanen felt a yearning to return to the Thunderstone fold six years beyond his last appearance in 2007. In the interim, journeyman Rick Altzi kept the Finnish melodic power metal veterans trucking along through their last album Dirt Metal – but the call to join Masterplan began an onset of inactivity. Adding ex-Before the Dawn drummer Atte Palokangas in 2014 leads to album six – as Apocalypse Again aims to re-establish the quintet as a solid force from a country and sub-genre well ingratiated in the hearts of fans worldwide.

Early on in their career Thunderstone deservedly got a lot of Stratovarius/Sonata Arctica comparisons when ramping up the double bass, happy chorus melodies, and faster guitar/keyboard riff team ups – so it’s little surprise that “Veterans of the Apocalypse” and “Wounds” serve up a healthy dose of that power charge long-timers treasure as Nino Laurenne and Jukka Karinen flash their arpeggio skill sets during guitar/ keyboard instrumental breaks. Ultimately to sustain interest record to record though, all cannot be based on flash and dash – which is where the band put the emphasis as they grow older, more dynamically interesting material of a mid-tempo variety. For instance, check out the commercially viable “The Path” – the main riff a head banging dream while also riding Primal Fear meets Nightwish waves in its occasional use of bigger than life background vocals and symphonic splashes, or the restrained “Through the Pain”, a semi-modern meets bluesy affair where Pasi proves his grit and melodic texture keeps listeners riveted through the verses and supreme, memorable chorus.

A lot of times power metal records can be front loaded with greatness and the quality tapers off by the second half. In the case of Apocalypse Again, the final two songs “Days of Our Lives” and the almost eight-minute epic “Barren Land” could be two of Thunderstone’s finest recordings to date. The former gives off an older Rainbow/Black Sabbath vibe, the keyboard and guitar parts very much tailoring themselves to probably their 70’s heroes – while the latter is a Symphony X-oriented progressive tour de force, the segments ebbing and flowing up and down the emotional register to again showcase all sides of the band’s musical abilities.

Unheralded by some, Apocalypse Again and Thunderstone deserve more attention for their expansive approach moves them beyond paint by numbers power metal, hopefully giving them better touring chances in building their following.