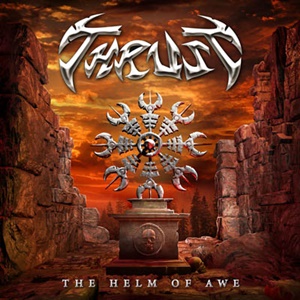 Old school mavens of the Metal Massacre series of records for Metal Blade may remember this Chicago band appearing on Volume IV with “Thruster” – attaining a deal with the label for their debut full-length Fist Held High in 1984. Moving out to California, they would change sounds and lineups, eventually dissolving. Guitarist Ron Cooke is the lone original member left from those days – erecting a new lineup and now on their fifth studio effort for The Helm of Awe. Content to deliver a sound that is very traditional sounding with NWOBHM/true roots, these ten songs will make most break out the studded leather and patch-adorned denim jackets, throwing down devil horn salutes to their favored headbanging riffs while shouting along to those anthem-led choruses.

When the band chooses to throw down some heavier, double kick-oriented efforts, you get the feeling that you are taking in aspects of early Metal Church or Savatage – “Blood in the Sky” a killer early highlight that gets the blood pumping with a fierce, simpler chorus and swift axe mechanics from Ron and second guitarist Angel Rodriguez. The more straightforward, focused qualities of the first four songs give way to a bit more epic atmosphere after that, the subsequent material at six to seven-minutes containing diverse instrumental sequences with acoustic guitars and calmer, restrained vocals in spots. “Killing Bridge” takes on that Dio-era Black Sabbath texture, the vocals of Eric Claro in particular captivating in a Ronnie James Dio meets James Rivera way while the bass underpinning from Ray Gervais settling into a lower, progressive sheen, while “The Traveler” features neoclassical acoustic picking, another solid Iommi-like electric riff parade, and soaring, confident epic melodies along with that alluring rhythmic groove that gets people swaying in unison. The record ends on the title track, another focused effort with some twisted death-like screams during the verses that work in rhythm to the mid-tempo riffs – possibly ending the record on an anticlimactic note as the hooks and composition feel a bit too clunky and trying to be diverse without hitting the mark despite a solid, guitar-hero lead break.

Thrust plays in that meat and potatoes power/traditional realm that rarely gains any interest from the younger metalheads – and that’s okay, as we know plenty of 70’s/80’s mavens that will be happy to scoop this up. The Helm of Awe should keep most Thrust followers pleased.