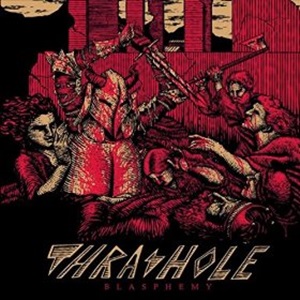 A name like Thrashole makes for some easy targeting. The former Masshole resident inside me will resist that comparison – but at least the moniker makes it easy to peg stylistically where the New Jersey act comes from. Starting in 2012 and releasing a 4 song demo Into the Thrashole that same year, a couple of lineup shuffles took place to get us to this latest Blasphemy EP. While the quartet isn’t shy about their affinity for thrash, there’s a little bit more going on as far as some traditional/classic metal elements to spruce up these 5 songs and push them a touch beyond conventional expectations.

Like many East Coast bands in this genre, gang background vocals and uppity tempos can go hand in hand – studying the textbook put out from Metallica, Overkill and Exodus especially in the mid-section and chorus for “Avarice” or the gallop heavy “Chains of Misery”. Guitarist Matt Elg handles the main vocals in a sneering, melodic manner – a clearer Dave Mustaine if you will, while bassist Andrew Campbell shows off in various sections his fluid, progressive note intensity which adds even more musicianship to the proceedings (the bass solo in “Chains of Misery” providing clear evidence to show some Steve Harris love). Clean guitar work from Elg and fellow six-stringer Jon Catsoulis often has a bit of a classic rock texture – the opening sequence to “Solitary Confinement” rings the bell for “Suite Madame Blue” from Styx before ramping up the proceedings into the thrash bob and weave consistency with Matt unleashing a Tom Araya-oriented scream from hell.

A positive for Thrashole which they hopefully continue down the line is the dynamic ability from the band to shift gears and styles effortlessly – as many younger thrash bands struggle to write distinctly unique songs, these five tracks didn’t feel like a hodgepodge of riffs, lyrics, and melodies that could be easily interchangeable. On the negative though, certain drumming sections became a touch predictable (the tail end of “Solitary Confinement” and a lot of “The Ender”), and the snare sound can be fatiguing for those who don’t want a wide open, almost hardcore-like pop to the mix. Blasphemy should appeal to a proper cross-section of classic metal and thrash followers who love versatility in their songwriting, a plethora of riffs to slam to, while also encouraging a decent amount of chorus shout-a-thon crowd participation moments in a half-hour. Waltz ‘til you die.