Thrashfire – Into the Armageddon (Xtreem Music) 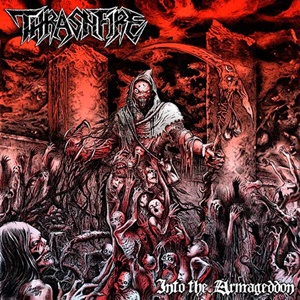 Sometimes it’s obvious what to expect stylistically on name alone. Take Turkish trio Thrashfire – active since 2006 and on their second full-length Into the Armageddon, most listeners would expect… thrash metal. They would be correct – along with an aggressive, speedy form of obliteration that doesn’t leave anything to chance, the type of thrash that brings about frantic chaos as the relentless nature of these ten tracks takes command and doesn’t let go. Even when the band choose to be deliberately slower, there’s this ominous sense that creeps in for a savage, ripping riff or time change to follow to bring the proceedings back to furious levels.

Influences come from the European side for the most part in these ten tracks – the vocals extreme to a Venom/Destruction mechanism, the desperation in the roars and screams palpable throughout songs such as “Katacomb (The Kingdom of Resurrection)” and “Through the Crimson Darkness”. You can expect thick bass play that weaves with the rhythm guitar foundation in a beefy manner – along with some sick, speedy drum fills and occasional blast beat nuances outside of the normal snare/kick madness at bullet train tempos. Song titles like “Slaughtered by Hellgoats” and “Pure Devastation Necromancy” leave little to the imagination as well – and you can only imagine what “High Hell in the Hell” would truly feel like down below. Lead breaks subscribe to the divebomb flurry of notes that aren’t necessarily aligning with the arrangement at hand – but there are a couple of tracks that stretch out to the five/six-minute mark where there’s a bit more groove/Sepultura-ish musical sequences going on, where “Supreme Command” can stand out from the rest of the pack.

It’s adequate in attack and certainly aggressive, but there are times where you are hopeful of a bit more varied approach from Thrashfire as the speed for speed’s sake angle can grow a bit tiresome if there aren’t more dynamic elements put in place. There are plenty of metalheads though who will praise Into the Armageddon because of it’s take no prisoners output, so bang thy heads and get into the pit for this one.