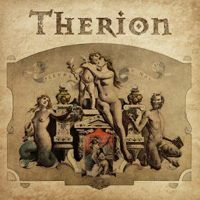 It’s going take open-minded music fans to enjoy the new venture of Therion. Le Fleurs Du Mal is an entire album of covers from the French Chanson genre of the 1960’s and 1970’s, coupled with a thought provoking album cover featuring a reverse of the St. Sebastian image (featuring naked lesbians). If anything this is highly ambitious and quite grand as far as album concepts go, but that’s what makes Therion different from regular metal bands. I don’t know too many bands who could find inspiration from the famous French lyricist Charles Beaudelaire, but this is what makes Therion tick these days.

Le Fleurs Du Mal (Flowers of Evil) also happens to be the same title of Mr. Beaudelaire’s seminal published poetic work in 1857. The band recorded 15 cover tracks from such long forgotten French singers like France Gall, Leonie Lousseau, Victoire Scott and a whole host of other more obscure singers. The entire album concept is quite alluring in many ways, what with the operatic vocals and genuine a heartfelt passion interwoven into the songs. Not to mention the orchestration consisting of traditional little ensembles that can be clearly heard on most of the compositions.

“Je n’ai besoin que de tendresse” (Claire Dixon cover) is truly infectious and probably the speediest track of the bunch. Then there is a section of more atmospheric numbers like “Mon Amour, Mon Ami” (Marie Laforet cover), and “La Maritza” (Sylvie Vartan cover) of which both adhere to a rather dark feeling that I found quite appealing. The music flip flops in tone quite often though and a more interesting turn can heard on numbers like “Polichinelle” (France Gall cover) Sœur Angélique (Annie Philippe cover) and “Wahala Manitou” (Leonie Lousseau cover). I say interesting turn because of the light tone and romantic underpinnings coursing through these set of songs, allowing the compositions to balance well against the darker numbers.

Somehow though, all the tracks seemingly fit well together to create a bold and unique listening experience. The French vocals add another dimension onto the music and they alternate from female to male a multitude of times, sometimes within the same track. There’s even a poetic passage found on the Serge Gainsbourg cover – “Initials BB” with an experimental approach to the song. I did some initial research and discovered this track to be dedicated to legendary actress Brigitte Bardot, so that makes it a rather novel approach.

Therion certainly deserve full marks for this release, especially for the sheer breadth of the moody compositions. There are moments of pure joy, romantic inclinations and dark overtones coursing through every song and it makes for a pleasurable listening experience. Who knew how well metal and opera could meld well together in such an exciting

way, and only Therion can do it their way. Le Fleurs Du Mal is a musical triumph.