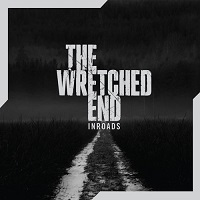 Post-Emperor life for guitarist Samoth hasn’t been exactly all that rosy. Some may have found value with his work with Zyklon, yet said band was grossly overrated and fizzled out two years ago, while his punk rock act with Casey Chaos of Amen (whatever happened to him?) Scum never quite got off the ground. With Emperor finally laid to rest, the man’s focus has become entirely the death metal-tinged The Wretched End, and for good reason – this is some rather severe stuff.

Inroads is the band’s sophomore outing, the follow-up to 2010’s Ominous. Parlaying a simplistic, yet hardly barbaric angle into blunt-force-styled songs, Samoth and crew have a winner on their hands with Inroads. In many ways, it runs against the current retro death metal movement, for the production is beefy, the riffs don’t come across as being written by a Neanderthal, and the lyrical focus stays out of zombies and graveyards. It doesn’t quite stick out like a sore thumb, but it’s a breath of Norwegian-freshened air. Like travelling through a fjord.

Samoth’s riff skills have shown little wear and tear since his Emperor days, with blazing tremolo picking comprising the guts of album opener “Tyrant of the Mountain,” which evokes visions of hair-whipping gone mad. “Death By Nature” is the album’s elite cut, a cold and jarring number which is awfully efficient in its brutal delivery. Bassist/vocalist Cosmo (Mindgrinder) is simply along for the ride, but also helps the cause by not going full-gurgle, like on “Cold Iron Soul.” But really, this is a showcase for Samoth and crew to show hey they can bust out simplistic Norwegian death metal.

Because Zyklon was never the world-beating for Samoth (and former Emperor drummer Trym) envisioned it to be, learning that the simple side of things works better must have some type of quasi-revelation. Of course, simplicity was never part of the Emperor vernacular, but with The Wretched End, it’s some sort of rallying cry. On Inroads, they work better than just about everyone in death metal in 2012.