The Vein – Scouring the Wreckage of Time (Shadow Kingdom Records) 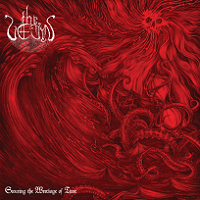 The side project of two current members of emerging Danish doom crew Altars of Oblivion, The Vein does the ‘ole sonic switcheroo by replacing the traditional, melodic doom sound of Altars of Oblivion, with doom/death. Doom all around! Designed to mirror the simplistic, but atmosphere-laden times of the early 90’s, the band’s double EP, Scouring the Wreckage of Time is a waterlogged, un-adventurous platter that frankly, only succeeds in sounding like it was recorded during the intended time period.

Aside from a rather porous mix job where the bass is placed higher than the guitars (who do these guys think they are? Gallhammer?), Scouring the Wreckage of Time does a lot of feely-touchy with the simplistic burrow of Lost Paradise-era Paradise Lost, and early Autopsy. All this does is give the band a free pass to be on the sloppy side of things, and even when diabolical chugs of hell rain down on “Pale Dawn Rising” or grim melodies enter the fray on “The Poisoned Chalice,” the results are that of simple do-overs, hardly worth picking over the originals. Furthermore, the noticeable drop in production values that starts with “The Great Deception” finagles the idea that perhaps the band should have done two separate releases as to one.

Ably pulling off doom/death without nicking the sides of the Holy British Trinity is a tough task, one that The Vein don’t seem up to at the present time. Scouring the Wreckage of Time never quite gets past remedial doom stages.

The Vein on Bandcamp