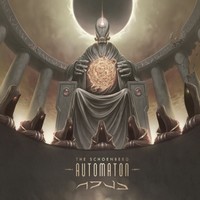 Oftentimes it’s so easy to get tripped up in the classification game. We hear the different influences and badly want to pigeonhole the band into a specific section and forget the point behind it: was the music any good? The Schoenberg Automaton is back with their second album, Apus, and there’s such a great collection of influences and design that it’s hard to put your finger on it. But, the main point: it’s good!

From deathcore to math-y influences to melodic and tech death – Apus will keep you guessing as to The Schoenberg Automaton’s mater plan. But the songwriting is very tight, and there is never a tug of war in regards to the band moving from riff to riff. There’s an overall design to be had, and it always aims for brutality. If you take a look at the track, “Withering,” you can get a semblance of how things are tied together. There’s a fair bit of chuggy groove action, some accelerated blasting, effective tech injections, and even some atmosphere as you peruse the track. “Don’t Be Disputin’ With Rasputin” uses a balance of frenetic speed and technicality with some massive breakdowns, as well as some great basslines and synth to really diversify the song – but one thing it has from beginning to end is plenty of aggression, and that ultimately seals the deal with The Schoenberg Automaton. Everything is seemingly done in order to keep things brutal, yet there’s never a spot over the 56-minute runtime that feels unneeded or bland.

Stepping up their game considerably from their debut VELA, Apus shows much technical prowess but never at the expense of the song. The flirtations with a number of different styles and progressions come off as genuine and exciting, and a reason that The Schoenberg Automaton is probably going to be a name that you hear plenty more of in the future.