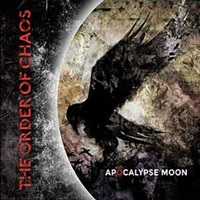 Edmonton, Alberta Canada may be known to most as the hockey town that Wayne Gretzky put on Lord Stanley’s map during the 1980’s, but there has been a potent metal scene brewing in these parts for quite a while. Death/black metal seems to be as hot here as in the Quebec area, but hopefully the steady in roads acts like Striker and the following band under the critical microscope The Order of Chaos are making prove there is talent abound in more traditional/power/thrash-oriented sectors too. Together for 12 years, Apocalypse Moon is the quintet’s third full-length record that contains a treasure trove of vicious riffing, energetic tempos and versatile melodies that run the gamut across multi-genre lines.

A few passes in you realize guitarists John Saturley and John Simon Fallon do not mess around in terms of their axe interplay, capturing elevation in their whirlwind chord progressions, intense tapping/harmonic moves and heads down power/speed picking. A lot of Yngwie Malmsteen meets Conception (remember “Roll the Fire”?) oriented whirls come in for the title cut, while things get a little thrashier for the quick hitting follow up “The Venom”. Drummer Tim Prevost can keep the metal ship on a tight course, occasionally picking up the blasting pace for dynamic differentiation while still mastering groove/ double bass principles – right out of the gate on the insanely addictive/evil opener “The Anthem of Pain”.

Another sterling feather in The Order of Chaos’ appeal resides in the multiple angles of attack from the voice of Amanda Kiernan. Convincing in both clean and extreme measures, similarities to Brittney Slayes of Unleash the Archers or Sarah Teets of MindMaze could come up when taking in the natural note holding abilities, and yet she has a lot of that Arch Enemy harshness during the screams/grit for “Death After Life” and the hypnotic anthem “Victim of Circumstance” that could win over a lot of the underground.