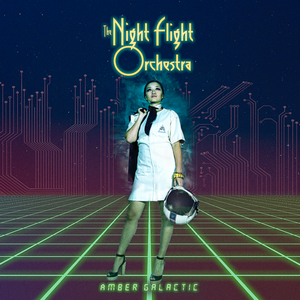 One has to wonder if Soilwork’s Björn Strid and David Andersson realized the longevity that their pet classic rock/AOR project, The Night Flight Orchestra, would have when they originally concocted the idea. But by rounding out the band with choice members (including Arch Enemy’s Sharlee D’Angelo) and allowing their passion to bleed through, they have now released three albums, the latest of which (Amber Galactic) getting the widest exposure so far with signing to Nuclear Blast last year.

Authentic, sincere, and just plain fun are the best ways to describe Amber Galactic. The band continue to do what they’ve done on the last two records, but raise the bar into stratospheric heights this time around. The songs are more cohesive and show the band as being unafraid to fully dive into the sound of ‘70s/’80s classic/prog rock with all of its indulgences (yet surprisingly none of its downsides). But there’s no better way than to go all-in with something like this, and in doing so, they’ve crafted some utterly addictive tunes. Perhaps even moreso than Soilwork, TNFO allows Strid to spread his wings vocally, with some emotive croons on “Jennie” and backing falsettos sprinkled into a few tracks (“Saturn in Velvet” or “Sad State of Affairs”) being some of the highlights. Not that it’s a totally vocal-forward album, with the guitar tandem of Andersson and Sebastian Forslund providing catchy hooks, melodic and bore-into-your-skull solos, and driving riffs. Just take a gander at “Gemini” or “Space Whisperer” and see if you can make it through without toe-tapping along with the guitar and vocal combo. All at the same time, Richard Larsson’s keyboards provide the perfect setting in taking the band back to their desired timeframe without turning it into a hokey parody. It’s clear from the opening number, “Midnight Flyer,” of the importance of the synths and their ability to set out to the front when needed (such as that oh so sweet keyboard solo).

Seemingly built for a summer road trip while it can be cranked to the maximum with windows down, The Night Flight Orchestra has captured everything that’s right about classic rock with Amber Galactic. Intoxicating and immediate from the start, yet built with the consistency to keep the energy going after listens hit the double-digits, the combination of explosive fun and precise and lovingly nuanced musicianship make this one tough to beat. Turn it up and relive your youth.