The Meads of Asphodel – Sonderkommando (Candlelight) 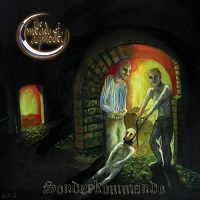 Prone to conceptual albums that detail very early Christian writings paired with a medieval image that at first glance, comes across as a gimmickry, England’s The Meads of Asphodel have jumped several centuries ahead to focus on the atrocities of World War II with Sonderkommando. Inspired by mainman Metatron’s trip to a former concentration camp, the subject matter of Sonderkommando is both sobering and harsh, detailing the “sonderkommando,” a group of Jewish prisoners forced to work for their Nazi captors in exchange for a few more days on earth.

The band’s flirtation with black and death metal couldn’t be more evident here, although the two styles practically lend full mobility when it comes to Meads. The 12-minute opening title track might not be the best representation of what the album is, but it’s arguably the band’s strongest cut date, leveling the listener with haunting Nazi propaganda speeches, atonal riffs, and waltz-like sections that chill to the bone. Additional segments of distress come in the form of “Lamenting Waves of Horror,” where a grown-up voice informs a child his parents are dead, supplementing the dark tide of atmosphere that hangs over the balance of the album.

Sonderkommando is probably going to get noted as the most focused body of work The Meads have done. Largely absent is the wacky twists and turns that were found on 2010’s The Murder of Jesus the Jew, replaced by informed, shadowy numbers like “Last Train to Eden” and “Hourglass of Ash.” Plus, Sonderkommando forces you to stare into the depths of what is arguably the darkest time in civilization, resulting in The Meads of Asphodel’s shining hour.