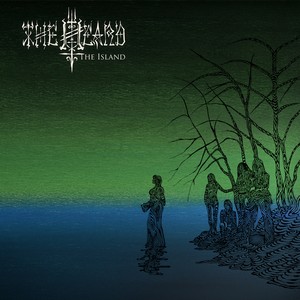 While some may initially throw their arms up in the air in fury at the prospect of another doomy occult rock/metal band with a female vocalist, The Heard has some finer points to them. For one, they are comprised of three ex-members of Crucified Barbara (Klara, Ida, and Nikki) and the Deathstars’ Skinny. Secondly, The Island is a concept album of which there’s some personal first-hand knowledge from the band itself. Lastly, they definitely don’t play by the rules of the genre.

The last factor is probably the most important when it comes to the way that The Island sounds. As a concept album, the boxes are checked in terms of the album feeling like it takes you somewhere, but the bonus of some of the band members personal experiences of said island also add to the experience. There’s an actual atmosphere to the album, which is what initially lures you in as well as brings you back for more. A bit hard to describe, but it’s a bit darker and eerie, and with the occasional fuzz of the guitars and passionate vocals from Pepper Potemkin, it makes for a great combination. It’s catchy and the band switches things up between heavier, grooving tracks and more melodic and rockish cuts to bring in some variety – occasionally all in one track, like the standout closer “Leaving the Island.” Unlike a number of the occult, doomy acts though, they like to bring in some faster tempos, which helps to give them some space, and tracks like “Revenge Song” and “Tower of Silence” take this approach for all its worth – not just with energy but raw melodies as well.

As per the opening paragraph, don’t expect anything remotely relating to the members’ former bands. The Heard takes things in a brand new and exciting direction for those involved. The Island is an intriguing, mysterious force and has some powerful moments for those who dig some doomy guitars and rocking elements.