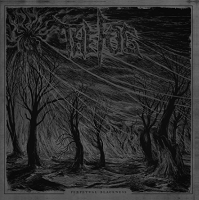 This is a big ‘ole slog in a bog, which definitely does rhyme with The Fog, but frankly, who gives a toss? A German blackened sludge/doom troupe who’s been working it since 2014, The Fog’s Perpetual Blackness wallows in the sort of nondescript, garage-level form of the underground that might be a quick line to metal’s sloppy-on-purpose past, but serves little other purpose. Seriously, you could swipe these songs in and out for one another, not know the difference, and still find yourself in a meddlesome trough of dried-up riffs and stale ideas.

As per the norm these days, The Fog rolls out the big and brash LONG opener by way of “Inaneness,” which if we weren’t paying attention, might be some kind of unintentional joke. There’s ample amount of slop-and-bang over this thing, without any real structure, made worse by its nine-minute runtime. Yikes. The Sabbath-in-reverse “Entropy Pillars” unfurls a few moderately successful riffs of the dissonance variety, but then one recalls or perhaps, recoils, at the level in which vocalist V. Lord was placed in the mix. He’s a bit too loud and proud here, as his played-out vocal belch finds the man either howling to the moon (without purpose), or, barely in time with the rest of the band (see: “Gloom Shoals”).

The only possible keeper among Perpetual Blackness’s seven jams would be “Grievous Scourge,” which ambles around depressive doom territory. But alas, it’s a little too late for such track listing turnabouts, as Perpetual Blackness digs itself a hole few quality underground bands could dig themselves out of. No slight against metal that is purposely retrograde, but it’s fair to ponder why some bands are so quick to emerge from their dank rehearsal rooms, clearly not ready for a proper release. The Fog is a prime example.