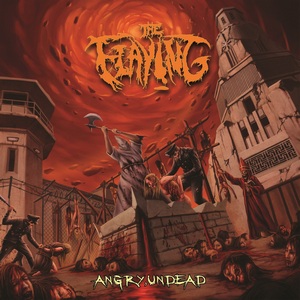 A usual hotbed for technically-inclined death metal, Canada has no shortage of extremity within their ranks. Quebec’s The Flaying entered their first album into the fray back in 2014 with Unhope. While the band had two singles last year, Angry, Undead marks their sophomore effort, and is full of all of the twists and turns one can expect from the genre.

Angry, Undead has that same frenetic charge that some of their fellow countrymen have managed to master over the years. The combination of unhinged energy with some serious tech indulgence a la Crytopsy, Archspire, or Neuraxis is readily apparent upon the revving up of “Disloqué” into top speeds as riffs spiral around with glee and bass lines rumble. The band wisely just provides nods to the above references instead of full-out copying their peers – even if fans of the genre do have a bit of an idea as to how the songs are going to flow. Effective mid-tempo chugs and churning helps to let the listener process and digest some of the more intense and driving moments (see the wonderful charge of “Place du Parvis”) where the bass seems to be given even more space to work with, in ways that go in some different directions when compared to much of the current scene. The intent with this music is brutality, and the production tone is spot on – giving the ability to hear the music fully but still giving it some weight for the riffing (and drum battery) to swing around. The vocals don’t vary too much, but complete the picture with the prerequisite aggression and fury.

Solid and thoroughly enjoyable, The Flaying make a name for themselves on their second album. Angry, Undead is never at a loss for momentum and rage, and still manages to tickle your ears with its massive grooves and musical prowess.