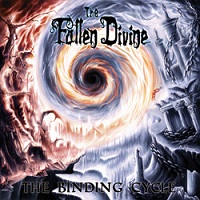 Being signed doesn’t always lend credence to a band, and vice-versa: some unsigned bands

are infinitely better than signed bands. And for someone that was once in an unsigned band before getting signed, this scribe recognizes that releasing an album of the quality of The Binding Cycle on one’s own dime is quite the feat and totally commendable, which in turn, gives Norway’s The Fallen Divine instant credence. Got that?

Formed in 2009, the Norwegians parlay a blend of early 90’s hugging Gothenburg death metal, mixed with bouts of acoustic bits ala Opeth. By all appearances, the band’s sound should lean more on the folk side of the fence, being that early Gothenburg melo-death (In Flames, Dark Tranquillity) often reigned in folk metal at the drop of a hat. But that’s not how The Fallen Divine rolls, so rather, TFD are quick to brandish those fluent, speedy riff du jour moments, especially on lengthy opener “Dissension,” where the Nords extend the song’s

There is a dearth of clean

vocals, which again, keeps the album right onLunar Strain/Skydancer plane. Vocalist Kvist is feral and frothy, maintaining a stranglehold on the otherwise gripping “Fire Lights the Night (Self-Ignition)” and melody-happy “Patterns Through Eternity.” When the band does dip into the Opeth pool, it’s usually with memorable results, as heard on album highlight “Replenished” and the title track.

The Fallen Divine made all the right moves with The Binding Cycle, including snagging producer/King Diamond guitarist Andy LaRocque. No doubt LaRocque’s expertise and songwriting know-how had to help these youngsters in the studio. Can’t really argue with the results on The Binding Cycle – this is one of the better debuts to hit the boards in the melodic death metal scene of late.