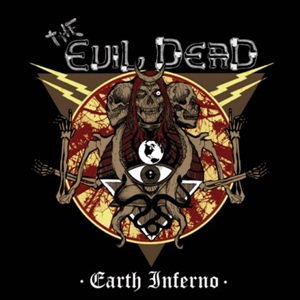 Original takes on well-established heavy music platforms appear harder and harder due to the sheer volume of bands and releases these days. One group aiming to shake things up in the blackened traditional metal realm is Argentina’s The Evil Dead – active since 2006 with a demo, EP, and full-length under their belts to set up this second record Earth Inferno. Their extensive use of classic hard rock and early metal nuances gives these nine tracks a time travel appeal, vaulting back and forth between the 70’s and 80’s to the 90’s when raspy, blackened vocals took over the extreme scene.

The electrifying twin axe harmony ethics from Ian and Michel Regueiro can conjure similar warmth and dark contrasts as everything from Slough Feg to Thin Lizzy, Iron Maiden, and even southern rockers Lynyrd Skynyrd – check out all the various twists and turns on “They Live” or the 7:31 epic “Maronan” as their depth of musical knowledge keeps everything sonically on stun/impress mode. When the band choose to use occult riffs or tempos, there’s always that classic contrast to keep things on the melodic side – the opening title track shifts between Mercyful Fate meets Dissection parts before the crunchier guitars and fluid bass take the song into early Bay Area thrash pastures, while vocalist Alejandro Regueiro adds that sinister sandpaper high pitch delivery to keep The Evil Dead one foot in the underground- a la Carcass and the much-missed Dissection. Drummer Santiago Botalla spices up a fun, rollicking “Electric Evil Revisited” with his playful fills and accents, knowing that the best metal also contains dynamics and groove/swing.

Earth Inferno isn’t afraid to explore extended instrumental sections where there’s a strong musical foundation, as The Evil Dead can weave that jam-oriented, smoldering excitement of interactivity, building passages into 70’s/80’s-like memories. The seven-minute plus closer “Chariot of the Gods” starts on that front, the guitars and bass echoing in triple-tandem to provide one of the album’s numerous air simulation moments, as well as providing an instrumental portion halfway in that makes this scribe think of classic nursery rhymes. Standing out in the digital music age isn’t easy – but this record does, because of it’s true to the bone philosophy, production, and execution. Highly recommended for all.